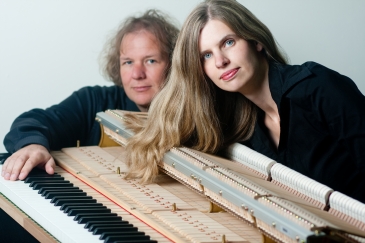 Canto Ostinato consists of small, entirely tonal cells which are repeated - how many times is left to the performer. The music’s basic pulse is constant throughout. There are significant differences between the cells, and sometimes the transitions between them, via non-repeating ‘bridges’, can be fairly abrupt, with new material suddenly appearing rather than fading in by imperceptible degrees as in some early minimalist experiments. Unexpectedly, and appealingly, a melody detaches itself from the texture about 1/3 of the way through the piece, which suddenly metamorphoses into theme and accompaniment for a few minutes; it wouldn’t work anywhere near as well if you hadn’t been listening to an hour of undulating, hypnotic repetition at that point; as it is, the result is quite an emotional shock. The number of performers is undetermined; when played by four, as here, the variants of the basic cells - versions with slightly different harmonies, chords replacing single notes, etc. - can all be incorporated simultaneously. Articulation and dynamics are also left to the performers, thus introducing interesting and sometimes unexpected changes in texture. The result of this for about two hours? A great deal more involving than one might expect, with sections based on contrasting cells adopting their own emotional identity; not so much meditative and calming as obsessively hypnotic, analogous to the process of paying closer and closer attention to subtle changes in a vast landscape on a long journey.